This year Pass-A-Grille and Tierra Verde are hosting their own Lighted Boat Parade and best of all it is a week later than the other beaches so we can get to see them all. 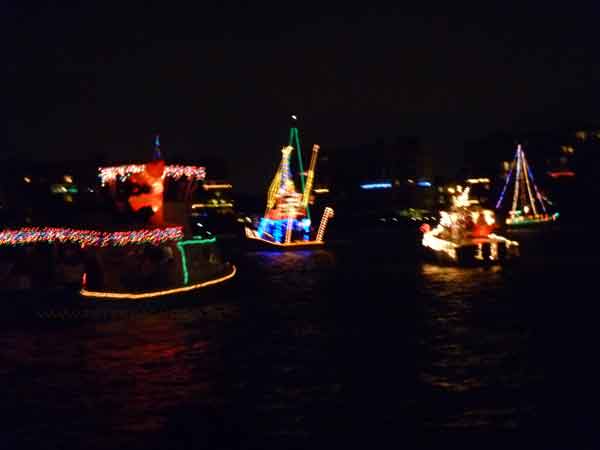 The boats will leave Merry Pier on Pass-A-Grille at dusk and work their way to Tierra Verde and back. This is destined to become yet another must see holiday parade and become a great family tradition for the locals.

Pass-A-Grille is a magical historic island and sits at the southern end of St. Pete Beach.

Where to watch the Pass-A-Grille Boat Parade

One of the best places to watch the parade is sure to be along the sea wall near Merry Pier. There is plenty of space for the best view and is where the locals will be.

Treasure Island, Florida hosts it’s holiday boat parade every year in December and is a must see event. Boats decorated with holiday lights circle the island and create a festive atmosphere. 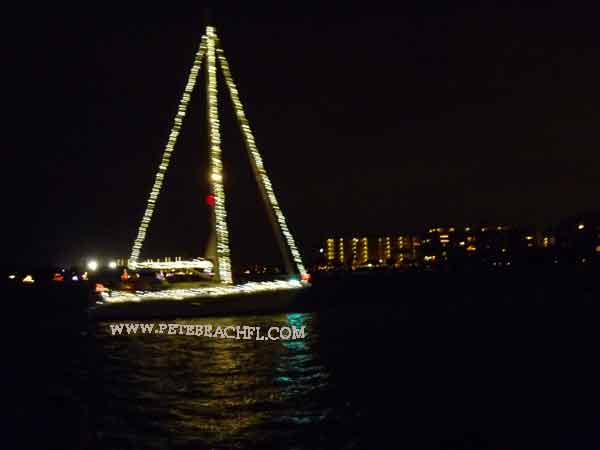 Where To Watch The Treasure Island Lighted Boat Parade

115th Avenue on Isle of Palms

The 2012 St Pete Beach holiday boat parade is an event not to be missed. Lighted boats, jingle bells, holiday lights, Christmas music and excited children – we know the holidays have arrived on our beautiful beach. 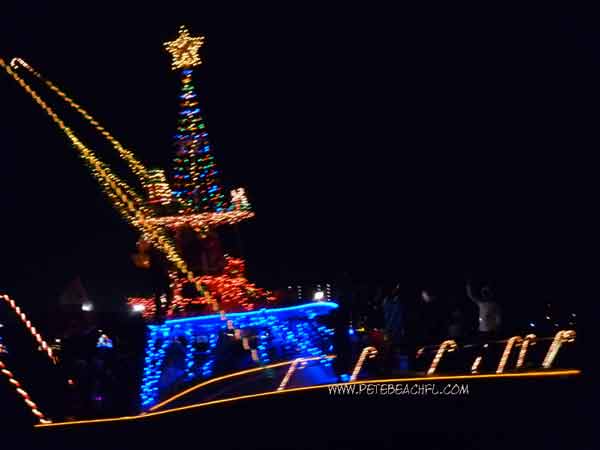 Where to watch the St Pete Beach Holiday Boat Parade

The 2012 boat parade on St. Pete Beach can be viewed along its route between Blind Pass Bridge and Bayway Bridge. The city of St Pete Beach host a boat parade viewing party and  holiday tree lighting at Horan Park and it has become a popular place to watch the boats.

This year the entertainment includes live music, crafts, Santa, and a tree lighting event hosted by MADD. Food and drinks will also be available for purchase.

The events start at 6 pm and the boats usually come past the Horan Park sea wall just before 7 pm – although they can be late so be patient and arrive early, bring a chair and claim your spot.

Horan Park is next to the St Pete Beach Community Center

Fly A Kite This Weekend October 2012

Treasure Island Beach | Things To Do Near St. Pete Beach 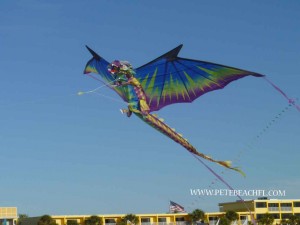 Do you love kites? This weekend is KiteOberFest and the sands of Treasure Island is a wonderful place to watch giant kites against the Florida blue sky.

Worldwide kite flyers will be converging on TI beach to show off their skills all in a good cause, to raise money for the Children’s Cancer Center of Tampa.

Where and when can you watch the kite show

Head to St Pete Beach this weekend and you stand a great chance of watching an amazing Meteor Shower.

If you love watching shooting stars then look up between 11 pm and 4 am on August 11, 12 and 13th 2012 for the best opportunity for seeing the Perseids Meteor showers.

Head to the beach!  I am going to go to an area away from the larger hotels because the darker it is the better chance we have of seeing this amazing display of nature. What better place to watch a Meteor shower than on the sand at St Pete Beach.

Head out to sea! If you are lucky enough to own a boat then this would be an amazing way to star gaze and get all the darkness you need.

No boat? There are many places that do sunset boat trips. I want to give a big thumbs up and shout out to Dolphin Landings Charter Boat Center – Captain Dan plans some amazing sail boat trips that harmonize with natures wonders. See if he still has room for his evening Shooting star trips or ask about the blue moon trip on August 31, 2012. Call: 727 360 7411 for trip information.

Corey Avenue – browse the shops, stop for a drink at one or two of the bars and then keep walking away from the stores (past the theater) to the end. It is pretty dark by the water at this time of night (early morning).

Find your own little place of darkness and if you can stay awake long enough enjoy natures display of shooting stars this weekend on beautiful St. Pete Beach.

We’ve seen what offshore drilling can do in the Gulf of Mexico – the BP Oil Spill is still on many beach communities minds.

Today August 4th 2012 the world is joining hands on the beach at noon local time. 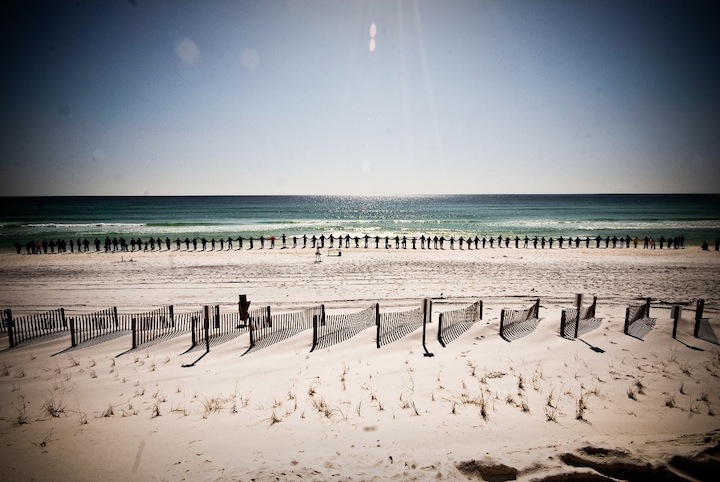 What Time Is The Hands Across The Sand Oil Drilling Protest

If you are not already on the beach enjoying this stunning day then make sure you  are there at 11 am. All of your family can join in. Come as you are – just out of the ocean, covered in sand, or roll off your sunbed – just be ready to join hands by noon.

At noon everyone will join hands for 15 min.

What is Hands Across The Sand?

Local “Hands Across the Sand” gathering in solidarity with events around the country to raise awareness about the dangers of offshore drilling and call on leaders to end our oil dependence and move America into a clean energy future. At noon, participants will join hands for 15 minutes to form a line along the beach/ shoreline

It is time to say NO to filthy fuels and YES to clean energy. It is time to draw a line in the sand, on the land, around our capitols with the powerful image of people joining hands in solidarity to say NO more drilling off our shores! Thousands of people joined hands around the globe on August 4th, 2012 at noon in their timezone.

Lets make sure that they stop off shore oil drilling!

Beautiful Corey Avenue, St. Pete Beach, FL is holding a Craft Festival today (March 31 to April 1 2012). The street is packed with local artists, crafts, unusual gifts – a great place to go if you are looking for the perfect gift to take home.

Corey Avenue is a wonderful place to stroll along visiting the local stores and enjoy a refreshing drink or meal.

Selena Gomez and Justin Bieber All Over St Pete Beach

The movie Spring Breakers is currently being shot on and around St. Pete Beach and people are spotting Selena Gomez and Justin Bieber everywhere.

Buy Selena Gomez Poster at Allposters.com
With our beaches already full of fun-loving spring breakers we now have the excitement of film crews and of course the celebrities.

Seems you can not go far without spotting either Selena Gomez (with or without) boyfriend Justin Bieber or co-stars Vanessa Hudgens and Ashley Benson.

This video was taken on Corey Avenue, St Pete Beach, FL during the filming of the new movie Spring Breakers.

Just among my small circle of friends there have been many sightings of the stars including:

Selena was seen walking on the beach – numerous times.

Do you want to see Selena Gomez, Justin Bieber or Vanessa Hudgens?

Just drive along the Gulf Blvd. from Pass-A-Grille, St. Pete Beach to Treasure Island and look out for parked trucks and signs saying “crew”. That means they are filming in that area. Now just look for a crowd of young people (usually in bikinis) and the stars are not far away. Hang around where they are filming and you might even end up in the movie Spring Breakers.

Do you want to be an extra in the movie Spring Breakers?

I have heard (according to CBS Tampa) that they are looking for around 500 college kids to be in a shoot on Wednesday 21, 2012. Try emailing springbreakersparty@gmail.com with a photo and you may have a chance. Oh, you have to be a resident of the Tampa bay area, over 18, and look great in beach wear. Good luck 🙂

Take a break from the beach and shop for fresh produce, jewelry, plants, gourmet food, local artistry, prepared food and listen to the live music.

I love to stroll around markets and most Sunday’s on St. Pete Beach we have two of them. Both within a short walking distance of each other.